Did you listen to the Torah reading today? Or perhaps read it? At least the forty verses that we chanted? Don’t worry if you missed the other 56 verses; it’s more of the same.

It’s actually quite simple. God is giving Moses the blueprint for the architecture and interior design of the Mikdash or Mishkan.

Commentators and scholars have a lot to say about the differences between Mikdash and Mishkan.

But I’m not particularly concerned about the difference, especially since in our parsha, the term mikdash is only used once while Mishkan is used 19 times. God is instructing Moses to tell the people how to build the special space where they will gather and serve God. The space where they will fulfill their obligations as a people, affirm their commitments as Hebrews, and perhaps we can even project a bit and say reinforce their identities as Jews.

And there are a lot of instructions for what the place must be.

First comes the materials list in the first seven verses. No quantities attached, but the list seems pretty complete.

And then follows a verbal description of how the materials are to be assembled.

Altogether in our Parsha, by my count, God gives Moses the plans and designs for 18 separate components of the Mishkan:

But there is a very interesting verse that precedes the written description of each component:

Note that God does not say “exactly as I tell you” or “explain to you” but rather that he is actually showing Moses the plan, the blueprint, the design.

It’s as though God is projecting an image or hologram on the mountain for Moses to actually be able to visualize the Mishkan. In fact, in verse 30 of Chapter 26 God tells Moses, “Then set up the Tabernacle according to the manner of it that you were shown on the mountain.”

Note that in our parsha Moses is only given the plans for the Mishkan. It’s not until parshat Va’yak’Hel in three weeks that it is actually constructed.

Let me ask you all a question: In hearing or reading the parsha, do you have a good idea of what the Mishkan was supposed to look like?

Do you have any idea of what it was supposed to look like?

Not me. I’m not an engineer or architect, but I can read simple building plans (at least for roads) and visualize them. But I really need that projection against the mountain that God showed to Moses.

We don’t have a Mishkan anymore. We haven’t for almost three thousand years, or perhaps two thousand years if you consider the Temple the Mishkan.

So what’s your Mishkan?

What’s the place where you are with God and God is with you?

What’s the place where you serve God?

The place where you fulfill your obligations, affirm your commitments and reinforce your identity as a Jew?

Is it here in Dorff Nelson?

Upstairs in the new Ganzberg Sanctuary?

Is it all of those, any of those, or none of those?

Perhaps it’s not in a synagogue at all.

It could be a place of Jewish study, Jewish Center, or Labor Zionist Hall.

Perhaps it’s not one place or space but several.

Or perhaps it’s not a place at all, but rather an association or movement. A space where Jews come together to be with God and affirm their commitments as Jews.

A goodly number of our regulars are missing today, gathered in Washington for the AIPAC meetings. Maybe that place is their Mishkan or one of their Mishkans.

Perhaps one of your Jewish identities is an obligation to remember the Holocaust and honor its victims. Then Yad VaShem, the many Holocaust museums and memorials, and spaces where the Holocaust is remembered and studied may be a Mishkan for you; or rather for all of us.

All of these are possible. These places may not resemble the literal description or plan that we read today, and I seriously doubt if any of them contain any dolphin skins. But they are all possible spaces for some form of sanctity – Mikdash – and Jewish gathering and dwelling – Mishkan.

Spaces where we are moved to bring gifts, each and every one of us, as our hearts move us. Even if those gifts are time, our presence and our participation.

I have such a place, even though I’ve only been there twice. It’s the annual festival and celebration of almost all things Jewish that takes place in England.

Most of you know about it. Many of you have actually participated in it, either in England or in one of the Limmud satellites around the world.

In England it’s six days of wall-to-wall nonstop immersion in Judaism and Jewishness. This year it attracted almost three thousand participants, included five hundred presenters, one thousand separate sessions, and myriad opportunities to find your version of the Mishkan.

I wish that I had the time to tell you about all of the fantastic sessions that I attended. Here are just a few:

I can honestly say that some of the sessions and experiences were life changing.

Two sessions on Tahara, the ritual cleansing of a Jewish corpse, and Hevrei Kadisha have rekindled my commitment to organize a lay Hevra Kadisha in our community. (Fortuitously, this coincides with just such an endeavor led by our clergy.)

At least it’s changed the way that I think about revelation, about text, and about narrative and experience versus writing and analytical thought.

In truth, this what I had intended to talk about all along. Rabbi Levy’s sessions were entitled “The Alphabetic Mind” based on a 1986 article of the same name by Eric Havelock. As far as I can tell, Rabbi Levy has not yet published on the topic yet. And I am not capable of doing justice to scholarship that he brought to the subject. To briefly quote him,

Writing was only invented a few thousand years ago… Judaism soon became a distinctly bookish tradition. … How was religion changed by the new technology of writing? ….how [have] early rabbinic traditions understood, conceptualized and prioritized the differences between Judaism’s spoken and written traditions.

Reading the written word is not only different from hearing, seeing and experiencing the same events and ideas, it also involves very different modes of thinking and understanding.

There is an irony in the way that we Jews have chosen to deal with our oral and written traditions. On the one hand, we have the Torah she-bi-khtav, the written Torah, and Torah she-be-`al peh, the Oral Law. But we are actually commanded to hear, not read, the written Torah, and we have not only written down the Oral law, but our homes, beitei midrash, and libraries are chock-a-block full of written commentaries on the whole of Torah. The transmission process that was once dynamic and experiential quickly became rigidified and analytical. It changed the way that we relate to Torah, to law, to history, to God, and to revelation.

I want to take you back to our parsha one more time. I know that it’s easy to forget, but what has just happened is that the people had heard the pronouncement of the Aseret Hadirbrot in a fantastic display of sound, visual effects and other physical sensations. Then Moses ascends the mountain to receive and presumably transcribe, that is, write, the rest of the law. The laws we read last week in Mishpatim, the laws of the Mishkan in T’rumah this week, the laws of the priests, their clothing and sacrifices next week in T’tzaveh, up to the moment in Ki Tissa when Moses descends with the written tablets. Objects, not experiences.

But clearly in our story, God did more than just hand Moses the equivalent of a book. We’ve already seen that he prepared something like of a hologram or Power Point presentation to show him what the Mishkan should look like.

Imagine now, when Moses descends and presents the tablets to the people and says, “This is the word of the Lord.”

The people would laugh at him. They would say, “Moses, we saw and heard and felt the word of the Lord at Sinai, and believe us, those tablets aren’t it.”

It would be as if God had performed Beethoven’s Ninth Symphony, complete with celestial orchestra, choir, light show and more. And forty days later Moses comes down from the mountain with the written musical score and says, “This is what you heard.” The people would look at the squiggles on the page and say, “what the heck is that? It’s not what we heard and saw.”

And when Moses presents the plans for the Mishkan to Betzalel, I wonder if Betzalel didn’t respond, “Why don’t you just show me what the Lord showed you.”

The alphabetic mind, the mind that reads and writes, is a mind that is limited and locked in. The narrative and experiential mind is the mind that’s open to wonders and novelty. It doesn’t let the words get in the way of the ideas or experiences.

So what is your Mishkan? Does your Mishkan follow the literal plan described in the words of our parsha? Or do you try to imagine what gifts your heart moves you to bring in order to create a Mishkan beyond the words, a sacred place where you can dwell with the Devine, and where you can fulfill your commitments, obligations and identity as a Jew?

A somewhat differently formatted PDF click on this image 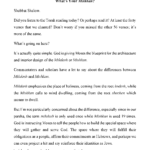